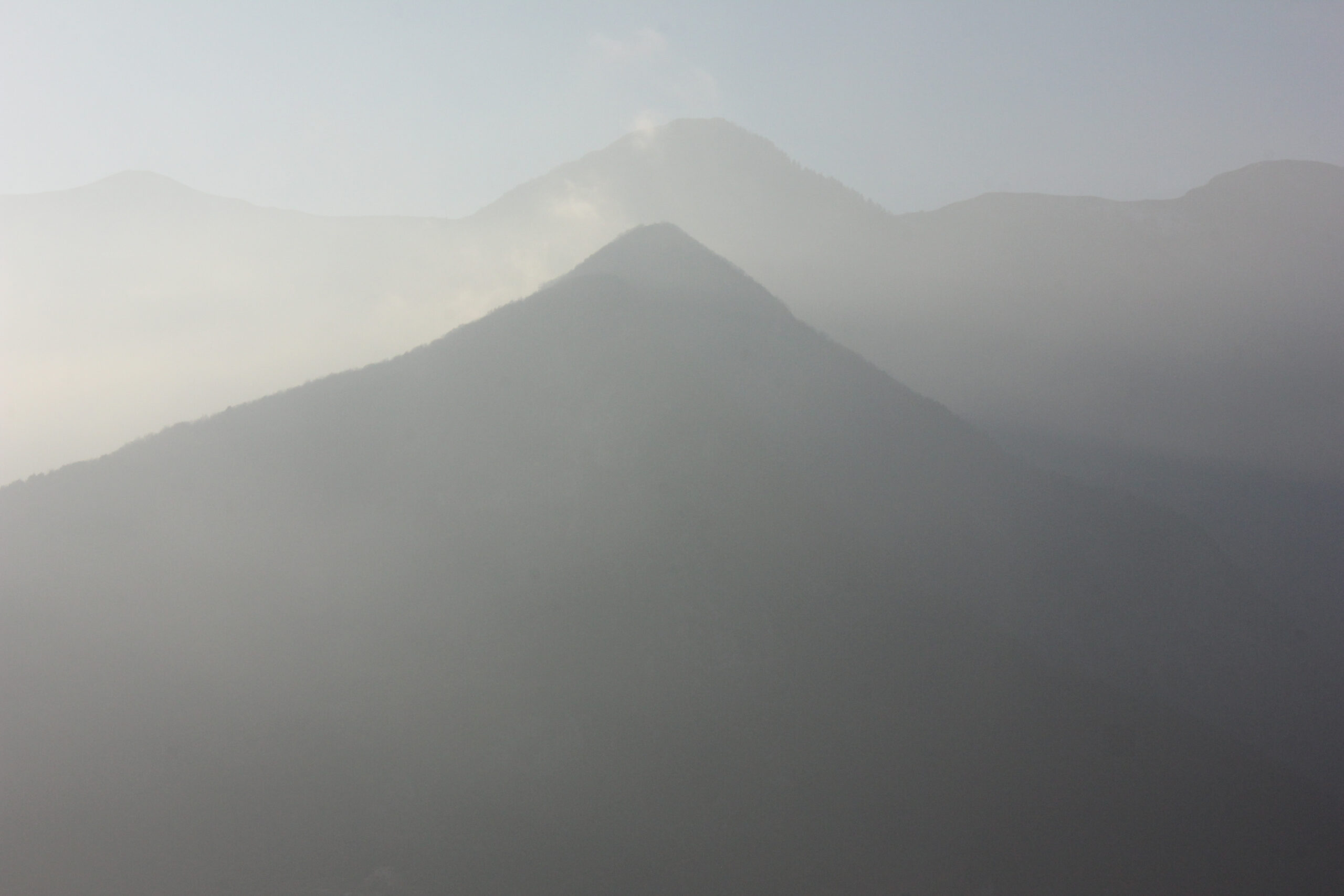 Text and photo by Daina Pupkevičiūtė

On the first day of the year 2022 I was watching the hill of antennas from the crest of the mountain opposite. A white-red torso of an antenna was sticking out – an alien object on the emerald green hill that had freshly emerged from the cloud ocean. Voluptuous waves were lazily licking the slopes while engulfing the valley in front of my eyes. The light, I thought, such light! Such an alien, I thought, looking at the antenna.

The day I decide to visit the hill of antennas in order to make out its form from above, I ask a friend to accompany me. I like to hear people telling me things about places. The air is still. No sun would manage to penetrate that thick grey cover of cloud. It is cutting my mountain horizon in two: the world below the cloud and the world within it. In its stillness, the cloud seems to have sucked in the oxygen along with the sharp edges of all things visible, stopped the time, silenced all the hiss and hum of the living.

Several hundred metres to the top, the hail starts. Snatching at my uncovered skin, tiny chunks of ice flail the scarce grass of the mountain, swishing while amassing in the furrows of the dirt-road, sneaking in through the meek coverage of pine needles, finding refuge in the crevices of the rock.

First stop at a clearing. Several antennas at the edge of it, a wooden cross facing the village down below and a ramshackle reminder of a barrack. Plenty of those structures remain in the mountains surrounding the valley, each as an echo of wars that have taken place here. They trace the shifting borderscape.

The history is here, it is always here, somewhat unsynchronised, running in parallel veins across the landscape. Just as the stories of belonging I am entrusted with: those stories, running in parallel veins, etch into time and landscape, extend along the riverbed. Each of them is knitting numerous pasts and various presents together. They direct my gaze, give the rhythm to my gait and train the ear.

The hail stops. As soon as it does, clouds start running wild over in the south east, soon hiding away two villages below, placed on opposing crests. There used to be a prison in the castle of one of those villages. Upon release, the prisoners would go and live in the village on the opposite mountain, I am told. Choosing to lead a life facing a constant reminder of suffering seems incomprehensible. It must be humbling, I think.

It is a January afternoon, meaning short hours of light in the Northern hemisphere, meaning we have to continue the trail encircling the mountain if we want to get back before nightfall. The antenna I want to reach is not that far, it is not a high summit after all, no more than 1000 metres above sea level. They don’t mean anything really though, the 1 and 0s.

— my fear becomes an electric impulse, I feel shudders running down my spine, needles in my fingers and a sharp hiss in my ear.

As we approach the top and that fenced off antenna, the cloud I was just watching starts to grow beneath, then around. It is suddenly everywhere. Rolling over a steep slope that had just made me tremble, it crashes on us as a wave, if I were to put it poetically. But I feel it looks more like a smoke bomb, this bulging and pulsing thing. Mountains, valleys, villages, my hiking fellow, the dirt road, the trail – all is swallowed. In that one motion, the mass of water drops suspended, moving inwards from the Mediterranean, levels everything into a thick grey, impossible to see through.

I am shortsighted. I must put in some effort to see things afar, to make out the shapes. As the cloud ocean lifts up to engulf the world as I thought I knew it, sight does not matter so much. In this shapeless world it has no such importance. I relax the eye and imagine the distance between the molecules of hydrogen and oxygen instead. Rarefaction and the dispersion of particles makes this damp wave-like immaterial matter move through, with, and over bodies of flesh, water and stone. I imagine the distance between the particles changing, a swarm of elements in constant motion.

A folk tale goes that if you guess the name of the cloud, the cloud comes down, becomes a lake and swallows the one that named it. I am thus breathing the cloud in and refusing the urge to name that which is happening.

With every breath I am taking within that cloud, there is the railroad, sheep, humans, shepherds’ dogs, the river licking barren rock, the noise of an unhasty mountain road, the silence of steep slopes, dogs and wolves, many things visible, even more things not.

I take a piece of rock, press it hard into my palm: it dissipates becoming thin flat plates. They call it pierre du soleil, my friend that has led me here says. Sunstone. It is the sun that makes it frail. This rock is sometimes dissolving beneath my feet when I walk the trails.

The history, too, often proves to be a type of matter that dissipates when one presses it hard between the index finger and thumb. If I indulge practices of forgetting, it becomes sand on the dirt road.

I am standing on a crest, looking into an opaque shroud that’s covering my entire field of vision. I listen. All sound is muffled. The shroud allows only for the small sounds to seep in. A shy chirp, a far away swish, an inquisitive crackle, a flat clack of a stone falling. I am usually offered such silence-scapes by my night walks, always in the company of the river racing to leave me behind.

Both mist and night are impermeable and porous at the same time. They both unfold over this terrain of sharp edges to allow the seeping in of that and those which are unexpected, unexplained and unwanted. In their act of smoothing out the shapes – those of bodies crossing the mountains, those of echoing footsteps undulating in the blackness of a railway tunnel – both the night and the mist question human acts of drawing borders, dividing the space into territorial units, embracing some while doing away with numerous others. Such aliens, they say.

On this fragile terrain of sunstone, if one aims to seep in, one must either be from here, or one must be more like mist, and just float over. Bodies of flesh and bone are taught to become ephemeral. One can’t sail the veins that are etched into this horizon unless one is more like mist and less like a body of flesh and bone. One is allowed to be a cloud, and as such to remain nameless, unnamed because of the fear.

Primordial fear running through these veins has a way of outliving the flesh. Choosing a life of constant fear must be enraging, I think.

The cloud is there, rising from the waters of the world’s oceans, undulating over the crests, defying the distance between all bodies. It entangles all matter. It softens sharp edges of this rough rock horizon.

I focus so that I can hear footsteps over the rocks, murmurs at the edge of a tunnel, molecules bumping into each other, I breathe, I am part of the cloud.

On the seventh day she went to the mountain.

And every cloud had a name.

Daina Pupkevičiūtė works at the intersection of sound – as an artist, curator, educator – and anthropology. Since 2009, under the moniker of Daina Dieva, she has released nine albums, two of which are collaborations. She has contributed to numerous compilations, lent her singing voice to friends’ works, and sonorised installations and visual performances. She is interested in collaborative processes as a way of revealing spacetimes, and in recent years has created and performed live music for contemporary dance.

Daina’s sound practice has been guided by her interest and participation in the scenes of metal, industrial and experimental music. Since 2018 she has curated ‘Matters. A Platform for Industrial Culture’, part of Kaunas European City of Culture 2022, aimed at supporting creators of experimental and industrial sounds and shaping a more inclusive scene. Her earlier artistic practice in the field of performance art focused on body, body/place entanglements, traumas, (hi)stories – sung, recorded, as well as ghostly. In recent years this field of research shifted to the field of anthropology. In her fieldwork, she seeks to understand relationships between humans, nonhumans and landscapes in the context of the climate crisis. Alongside the more habitual ethnographic methods she deploys listening, photography and walking to read entanglements that span beyond time.